Alan Dyer and his wife Elsie have spent most their adult lives in Sheffield, centre of the beautiful rural district of Kentish under the shadow of Mt Roland, Tasmania’s most scenic mountain. Two of Alan’s grandparents were pioneer settlers of this pristine district providing Alan with the incentive for recording its intriguing history. Since their retirement as proprieters of Slater’s Country Store in Sheffield, Alan had pursued his passion for researching and writing local history. Some books have won awards from both the Tasmanian Family History Society and the Autralian Institute of Geneological Studies Inc. In his working life, Alan was one of the prime movers in bringing the first murals to Sheffield. In June 2017 he was awarded an OAM (Order of Australia Medal) for services to Local History. Because most of the books Alan published over his life time are out of print and contain historical information not elsewhere recorded, they are now being made available as e-books. You will also find an extensive series of articles on Kentish History written by Alan under ‘History of Kentish’ on the menu. 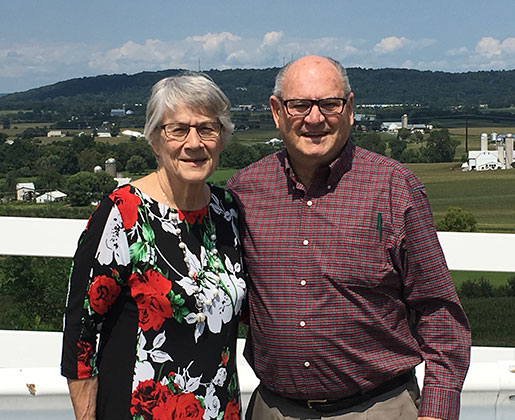 God was their Rock

Set against a background of local history is this fasinating story of Christian Brethren pioneers and their descendents in the Kentish district of Northern Tasmania. First published to commemorate the centenary celebrations of their coming to Kentish, this much sought-after-book lists additional historical and genealogical information on nearly fifty pioneering families of Kentish.

A free immigrant to Van Diemen’s Land in 1835, Alan‘s great grandfather was a Hadspen innkeeper before becoming one of the earliest pioneers on the Kentish Plains. There were four surviving sons: William, Benjamin, George and John, and five daughters who married Richard Saltmarsh of Cressy, Frank Perkins, Henry Arnott, Henry Boutcher and David Duff all of Kentish. The books  contains the story of one notable Dyer descendant – Victoria’s famous footballer, Richmond captain and coach Jack Dyer.

This book traces the story of one of Tasmania’s great country stores throughout its one hundred year history. Located in the centre of Sheffield, the famous  Town of Murals on the Northwest Coast. Slater’s Country Store has opened its doors for business all through the constantly changing decades of the 20th Century. The book is much more than the story of a family store and its many staff. It is a social history of how a small country town coped with war and depression, progress and change.

Being deprived of much of its tradional agricultural revenue base, the book concludes with an enterprising community creative enough to find a new source of revenue – tourism which today has the Mural Town of Sheffield throbbing with new life.

Dying to Be Healthy

This book opens up a world of anguish and pain from the past that present generations willl find hard to comprehend. Commencing with the harsh conditions experienced by the earliest pioneers while trying to clear their bush blocks in the Kentish district on the North West Coast of Tasmania, it goes on to describe how these settlers battled through those early decades without doctors, dentists, chemists, hospitals, undertakers, cemeteries or clergymen. The book lists most of the early bush nurses, midwives and local quacks, including various bush cures, home remedies and herbal concoctions prescribed for cures. It delves into the precarious conditions surrounding childbirth in the early days and considers why so many mothers and babies were so tragically lost. It also identifies the main killer diseases, along with the epidemics that tooks so many lives, especially children.The deaths of scores of old pioneers, parents, youths and children are included and the wretched complaints that killed them.

Dying to be Healthy tells how over the decades medical advances gradually improved the lifestyles of Kentish inhabitants and concludes very positively.  This is the first time, as far as the author is aware, that a comprehensive health history of an entire community has been documented in this detailed and descriptive way. Profiles on all the doctors, dentists and pharmacists who have practised in Kentish are included.  In telling hundreds of fanscinating family stories, this very readable book combines both the horrific and the hilarious. You won’t be able to put it down.

This book tells the fascinating life stories of all the owners and occupiers of Sheffield’s oldest shop. It is a captivating collection of its many entrepreneurs, who arrived in Sheffield from all parts of the world: England, Scotland, Ireland, America, Denmark, Germany, Netherlands, New Zealand even New Guinea. Some were wealthy millionaires, others started with nothing. Set against the unfolding history of Kentish, this book begins with the first pioneer leader Robert Maley and his incredible mother and sister. Next comes American born Major Thomas J Clerke and his  younger brother Lieut-Colonel Martyn Clerke, both of whom made an enormous contribution to Kentish. It relates how Lord Peter and Lady Beverley Murray along with ex-Premier of Queensland Sir Joh and Lady Flo Bjelke-Petersen with her Pumpkin Scone Shoppe received national publicity like no other restaurant in the whole of Australia. Most of the local staff, who have worked in Sheffield’s oldest shop over the years, are also mentioned. As are the personal stories of the some of the towns’s iconic tourist personalities: Martin Klussendorf with his horse and wagon, Mathew Simms with his badpipes, and Ludo Mineur with his alpacas.

This book reconstructs the life stories of the three Morse brothers who migrated to Van Diemen‘s Land in the middle of the 19th century. Their ancestral family had lived around the village of Puriton, Somerset, England for more than 500 years. The opening chapter relates how the father and uncles of the three brothers spent a month in a Somerset jail because of the harsh injustices of the legal system and their poverty pushed circumstances. The second chapter traces their long hazardous boat voyages to Van Diemen’s Land, including dodging icebergs as they sailed across the Great Southern Ocean.

James Morse arrived first and was employed by the original owner of Calstock, near Deloraine. Learning from his employer, James soon purchased some of the first land sold in this important country town. His remarkable success and his desire to help his two brothers come and join him is impressive. Once Charles and Edwin Morse arrived, they too commenced farming, purchased property, married and multiplied. Their obsession with racehorses, breweries, hotels and publican’s daughters made the later changes in some Morse families an unlikely prediction.  When the rich Kentish district opened up, Edwin Morse and other related families moved there to become pioneer settlers of West Kentish and Paradise beneath Mt Roland. All three brothers lived remarkably long lives, which very few of their descendants achieved. This book also covers the first few generations of the three Morse brothers’ offspring. Connected families include Braids, Charlestons, Cockers, Davies, Days, Dazeleys, Duffs, Dyers, Forwards, Jordans, Richardsons, Spicers, Whileys, Wilsons and Wyatts.

The Family Chronicle of Thomas and Mahala Clarke

This booklet gives the English & European Ancestry of Thomas Clarke and Mahala Beaumont who met and married in Launceston in 1862. Towards the end of the 19th Century, they commenced a country store in Sheffield that ultimately became one of Tasmania’s great country stores Slaters of Sheffield. The Clarkes’ five daughters married Richard Brain (Launceston), Ernest West (Cluan), Len Manning and Jesse Slater (both Sheffield) and Edward Joyce (Burnie). The families of these five couples are outlined in this book along with other Clarke and Beaumont relatives in Tasmania.

Read on Any Device

A passion for
Kentish history…